The notion of robots infiltrating the workplace has been a popular water cooler topic for years. Once purely paranoia, the idea is steadily gaining real world credibility as the number of industrial robots cranked out per year exceeds the 200,000 mark. Some interesting new research suggests that the automated workforce concept is moving beyond the factory zone.

Out of 702 job fields analyzed, telemarketing, underwriting, accounting, and even modelling were among those with the highest risk for being replaced by robot technology. Using data from a 2013 Oxford University study, BBC came up with this cool calculator that that lets you see how likely your current job is to be overtaken by a robotic employee. Researchers based these projections on factors like skill level, job difficulty, and the continuous evolution of automated technology.

Some of the jobs on the endangered occupations list are tucked away in the IT arena. IT people in these fields may need to be on alert for the rise of a robotic workforce.

As the most basic IT job of the bunch, it makes sense that data entry is one of the easiest to automate. Robotic process automation (RPA) is being touted as the biggest threat. RPA is a software technology designed to both record and interpret a broad range of critical business processes, including those performed in areas such as accounting, customer service, and human resources. The promise of 20 to 40 percent savings in labor costs is a big reason RPA is highly likely to all but obliterate manual data entry.

IT operations technician looks to be the IT job in the most danger of being swallowed by automation according to Oxford’s findings. I fired up BBC’s calculator and saw the chances of this happening are “fairly likely” at 78 percent. An IT operations technician may perform several duties depending on the employer that pays for their services. I imagine the potential automation has for analyzing software and hardware problems, managing database operations, and executing backup and disaster recovery efforts is the reason humans in this field need to be peeking over their shoulders.

IT engineers are integral to adapting and managing various types of technology in the enterprise environment. A professional in this category may be responsible for installing software, maintaining hardware platforms, and overseeing all internet operations within an organization. So are these technical workhorses really replaceable as the collective backbone of IT? According to the calculator thingy, it’s a toss up. Yep. Oxford researchers found that IT engineers are 58 percent likely to be replaced, which the calculator considered “too close to call”. Maybe keep your sweat rag handy – just in case.

The Future of Enterprise IT 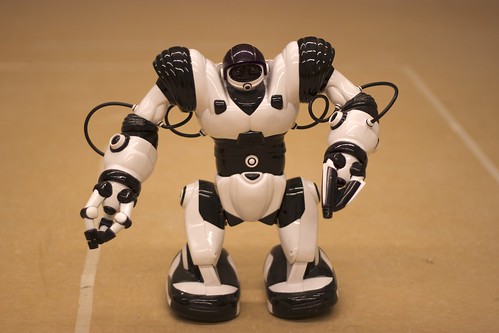 If the predictions pan out, automation may play a significant hand in higher unemployment rates and social unrest. The good thing for most IT specialists is that despite being almost a natural fit, automation may not be a huge threat to their way of living after all. Several IT jobs are as safe as Matt Holiday at home plate, especially web designers and developers, IT project managers, and user support technicians to name a few.

Robots may not be joining the IT department any time soon, but tighter automation integration is almost a given as algorithms become more advanced and enable software to complete a wider range of tasks. On the bright side, the ability to brainstorm original concepts, collaborate with team members, and make the decisions that get results are traits that only humans possess. Those characteristics will always give talented IT leaders, creators, and communicators an inspiring edge over their automated counterparts.